Some of the design packages I rely on use very crude GIS facilities. In fact, all they can support is a georeferenced raster as a background image, so it’s more of a rough map than GIS. It helps if these rasters are at a decent resolution, typically 1m/pixel or better.

A while back, I asked on the QGIS forum if the package could output high resolution georeferenced rasters. I received a rather terse response that no, it couldn’t (and I inferred from the tone that the poster thought that it shouldn’t, and I was wrong to want such a thing). I shelved the idea at the time.

After having to fix a lot of paths in a QGIS project file I’d moved to a new system, I noticed that all the map composer attributes are rather neatly defined in the XML file structure. Some messing around with Perl, XML::Simple and Data::Dumper::Simple, and I had a little script that would spit out an ESRI World File for the map composer raster defined in the project.

To run this, you have to create a project with just one Print Composer page, save the composed map as an image, save the project, then run the script like this:

There are some caveats:

Industry Canada publishes the locations of all licensed radio spectrum users on Spectrum Direct. You can find all the transmitters/receivers near you by using its Geographical Area Search. And there are a lot near me: 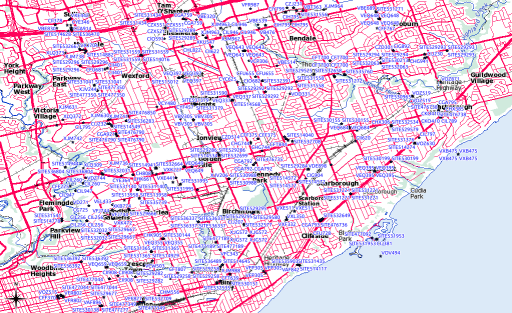 While Spectrum Direct’s a great service, it has three major usability strikes against it:

Never fear, Perl is here! I wrote a tiny script that glues together Dave O’Neill‘s Parse::SpectrumDirect::RadioFrequency module (which I wonder if you can guess what it does?) to Robbie Bow‘s  Text::CSV::Slurp module. The latter is used to blort out the former’s results to a CSV file that you can load into any GIS/mapping system.

The results aren’t perfect; QGis boaked on a file it made where one of the records appeared to have line breaks in it. It could filter out multiple pieces of equipment at the same call sign location. But it works, mostly, which is good enough for me.

North is a slippery thing, a trickster. There are at least three norths to choose from:

That grid to true correction is what I’m looking at today. In my work, I need to work out where shadows of wind turbines fall. I work in grid coordinates, so I need to correct for true north sun angles. Here’s a shell script that uses familiar programs invproj and geod to work out the local true north correction:

The script is called with two arguments (the easting and the northing) and an optional third argument, the SRID for the current projection:

The value returned is the angle (clockwise) that grid north differs from true north. Unless you’re using the same SRID that I’ve put in the script as default, you probably want to specify (or change) it.

So how do I know if this is even remotely correct? If you look at any CanMatrix scanned topographic map (either Print Ready or Georeferenced). there’s a declination indicator shown: 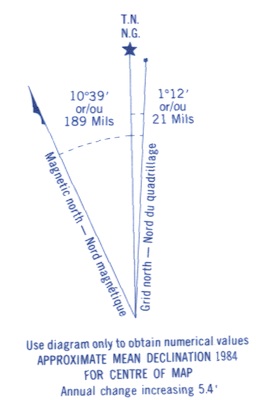 Beware throwaway comments; that way overanalysis lies. This was a challenge.

… pretty close to the one I’ve already worked out by ward.

Scraping the neighbourhood populations was hard. For the 140 neighbourhoods, the data is stored in a pdf with the URL like http://www.toronto.ca/demographics/cns_profiles/2006/pdf1/cpa124.pdf (in this case, 124; Kennedy Park, represent!). The population number is stored in a table on page 2 of each pdf. I used pdf2xml to convert the files into something parseable.

Of course, the tables weren’t exactly in the same place in every file, so I took a sample of 10% of the files, and worked out the X & Y coordinates of the population box. pdf2xml spits out elements like

Yes, I should have used an XML parser, but a Small Matter of Perl got me 126 out of the 140 matching. The rest I keyed in by hand …

Table after the jump.

END_OF_DOCUMENT_TOKEN_TO_BE_REPLACED

Toronto publishes its candidates here  http://app.toronto.ca/vote2010/findByOffice.do?officeType=2&officeName=Councillor in a kind of tabular format. All I want to do is count the number of candidates per ward, remembering that some wards have no candidates yet.

Being lazy, I’d far rather have another program parse the HTML, so I work from the formatted output of W3M. It’s relatively easy to munge the output using Perl. From there, I hope to stick the additional data either into a new column in the shapefile, or use SpatiaLite. I’m undecided.

which outputs the following (header added for clarity):