I’m still learning how Toronto encodes its roads – and whether this is a common practice. Between intersections, roads are stored as polyline segments. Kennedy Road (blue) and Eglinton Ave E (red) are shown below as a series of road segment minimum bounding rectangles (MBR): 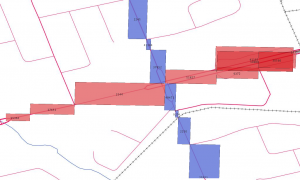 I was hoping it would be quick and easy to find the MBR of the whole street, then search for intersections only in the intersections of the MBRs. On an orthogonal grid (even a squinty one) this would save a bunch of searching.

I don’t know if I can use the fact that the end points of road sections are common at intersections. I really am a geonumpty.

All this may soon be moot, as I hear that the next release of the toronto.ca | Open data – expected early April – will have explicit intersection data. Yay! 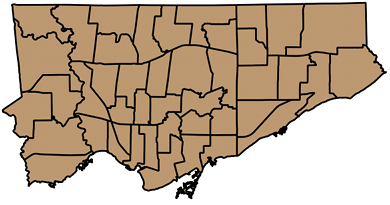